Nine years after the California Gold Rush, gold was found at Boston Bar in the Fraser River. Chinese workers and miners who had been in California for the Gold Rush moved north to work claims along the Fraser River in the colony of British Columbia. Later, newcomers directly from China began to arrive as well. Most Chinese newcomers were single men from the Pearl River Delta region of southern China, who would send earnings from the gold fields back to their families in China.

The Chung Collection is perhaps best known for its extensive and unique collections on immigration and settlement, especially the Chinese experience in Canada and the United States. Photographs, documents, and artifacts tell stories of the struggles and eventual successes of Chinese immigrants and their descendants in fields such as business, politics, and the arts. The collection also contains extensive secondary sources on the subject of immigration and diasporas, as well as novels and first-hand accounts describing early Chinese-Canadian and Chinese-American communities. The collection also contains material related to Scottish immigration to Canada.

The Asian Experience in North America

Immigration from Asia to North America began in earnest in the middle of the nineteenth century as the gold rush in California, and later in British Columbia, offered wealth to many Chinese newcomers who were struggling with poverty. Chinese labourers were instrumental in building the transcontinental railway. The Chinese workers were paid less to do the most dangerous jobs and often worked harder than local labourers. Since employers also used Chinese workers to break labour strikes, violence and prejudice grew. When the railway was complete, the Canadian government instituted a head tax of $50 in 1885, payable by every person of Chinese origin on entering Canada. This amount increased to $500 in 1903 before Canada barred Chinese immigration altogether in 1923. The Chung Collection contains many documents relating to early Chinese immigration and work experiences such as contracts for Chinese and non-Chinese workers, petitions to the government about Chinese rights and about restricting immigration, anti-Asian ephemera, head tax certificates, and government reports.

Despite the difficulties faced by Chinese people in Canada in the early part of the century, many became vendors and business people, establishing family-run laundries, tailor shops, restaurants, and grocery stores. The communities surrounding these businesses and homes became the Chinatowns of Victoria and Vancouver. At times, these Chinatowns were home to gambling houses, places of entertainment, and legally-available opium. Some artifacts from gambling houses and opium dens in early Chinatowns can be seen in the collection exhibition, as well as numerous photographs, correspondence, pamphlets, and other material.

Images of Chinese People and Communities in North America 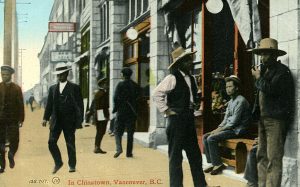 Photographs offer a special insight into cultures, communities and people. Dr. Chung meticulously gathered a comprehensive collection of photographs and postcards of Chinese-Canadian and Chinese-American people and communities. Photographs depict families, Chinatowns, and various aspects of the social, cultural, and work life of the Chinese diaspora. Highlights include historical class photographs from Vancouver’s Strathcona School, street scenes from the Vancouver, Victoria, and San Francisco Chinatowns, Chinese-Canadian wedding portraits, and the 1915-1918 photograph album of Jue Fong, then a Chinese-American teenager, which offers rare candid photographs from that time period. 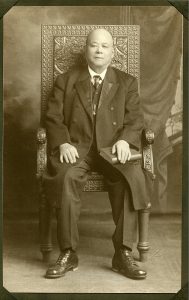 Yip Sang, an entrepreneur, community leader and philanthropist, was born in Shengtang village, Guangdong province, China in 1845. He emigrated first to San Francisco in 1864, then traveled north to British Columbia in 1881, following the California Gold Rush. There he gained employment with the Kwong On Wo Company as a Chinese foreman on the Canadian Pacific Railway line.

After the completion of the railway, Yip Sang settled in Vancouver. His connections with the C.P.R. eventually led to his recruitment by the Canadian Pacific Railway Company as a Chinese passenger agent. He founded the Wing Sang Company in 1888 (the name was changed by his children after his death to the Yip Sang Company), initially an importing and exporting business. The Yip family home and business at 51 Pender Street became an iconic building in Vancouver’s Chinatown as many Chinese Vancouverites would visit the building to buy goods, reserve tickets for a C.P.R. steamship crossing, or deposit their money in the Wing Sang Company branch of a Hong Kong-based trust company. The Yips also acted as unofficial postmasters for the Chinese community, ensuring letters to and from family in China arrived.

Yip Sang was also renowned in the Vancouver Chinese community for his philanthropic work. He was instrumental in the foundation of Vancouver’s first Chinese school and first Chinese hospital, as well as the Chinese Benevolent Association. A believer in the importance of health, education, and community leadership, Yip Sang was involved with hospitals, schools and political organizations in both Canada and China. He married four times, had 23 children who became leaders in business and the professions, and 67 grandchildren. By the end of his life in 1927, Yip Sang was a highly respected Vancouver citizen and the “unofficial mayor” of Chinatown.

Archival material of the Yip family members and the Yip Sang Company was entrusted to Dr. Wallace Chung by a Yip family member when the building at 51 Pender Street was undergoing renovations in the 1990s. Now part of the Wallace B. Chung and Madeline H. Chung Collection, this material includes business records reflecting all the activities of the Yip Sang Company, including records of passengers aboard C.P.R. ships, and personal records such photographs, correspondence, diaries, and other documents. More archival material of the Yip family can be found at the City of Vancouver Archives. 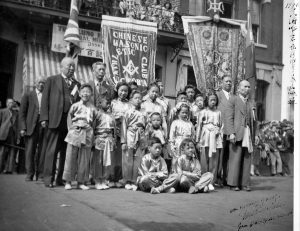 Benevolent societies and associations formed an important foundation to early Chinese-Canadian society. Such organizations provided social welfare to immigrants in need and to the thousands of Chinese labourers thrown out of work after the completion of the railway. Also, they protected the Chinese against racism in an increasingly hostile white society. Ultimately, these associations became a political force and symbolized the consolidation of Chinese society.

The Chinese Freemasons were one such society. The first branches of the Chinese Freemasons in Canada were formed in 1876 in Quesnel and Victoria. Eventually, branches were established across Canada and were all affiliated under one national convention. The Chung Collection holds archival records of the British Columbia Chinese Freemasons, including correspondence, documents related to the affiliated Dart Coon Club, donation receipts, and Chinese games and herbal medicine texts.

Clandonald and Scottish Immigration in Canada 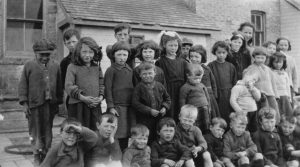 As soon as the railway was complete, the Canadian Pacific Railway Company promoted the colonization of Western Canada. The vast areas of land given to the C.P.R. under the railway construction contract were to be settled and sold for revenue.

Immigrants were organized in groups, like the families from the Hebrides and British Isles, who in 1926 were brought to establish the Clandonald Colony, about 230 kilometers east of Edmonton, Alberta. Given free passage to Canada, each family was provided with the basic provisions needed to start their new life in Canada.

Hundreds of town sites across the prairies followed the same settlement pattern. Under the settlement schemes, the C.P.R. would loan the funds for the purchase of land. Settlers also became further indebted to banks when they purchased the necessary farm implements and animals. Attracted by “The Wondrous West” they often found themselves struggling against a harsh and unfamiliar climate, forced to break more and more land to meet their financial obligations for the land debt and taxes.

The Chung Collection contains the archival material of Rev. Andrew MacDonell, a minister from the Scottish Hebrides who worked with the C.P.R. to relocate several hundred families from Scotland, Ireland, and England to settle in the Alberta colony Clandonald. The documents include MacDonell’s diaries, photographs and correspondence, as well as material related to the Scottish Immigrant Aid Society and maps of Clandonald.