The Chung Collection holds one of the largest research collections on the Canadian Pacific Railway Company. Complementing the collection’s documents on Asian immigration and the Chinese experience in North America, the C.P.R. portion of the Chung Collection tells the story of the building of the railway, the C.P.R. steamship services, and the experiences of travelers on C.P.R. ships, trains, and planes. The collection is rich not only in archival materials originating from the C.P.R. and publications about the C.P.R., but also in artifacts and graphic material, reflecting travel and tourism.

Dr. Chung was first inspired to collect Canadian Pacific Railway Company items as young boy by a poster of the Empress of Asia on the wall of his father’s tailor shop. His collection started modestly, with newspaper clippings and scrapbooks, but has now grown to thousands of rare and sometimes unique items. 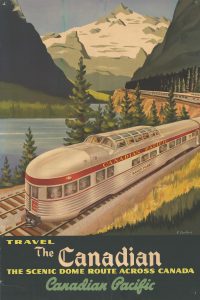 Travel the Canadian : the scenic dome route across Canada. CC-OS-00267

The Canadian Pacific Railway was built to unite the new nation of Canada and fulfill a pledge that John A. Macdonald made to the Colony of British Columbia upon its entry into the Confederation that a transcontinental railway would be built within ten years that would link the west with the east.

In February 1881, the Canadian Pacific Railway Company was incorporated to spur westward construction through the rugged mountain passes and deep canyons of British Columbia to a terminus at Burrard Inlet, Vancouver. Surveys were made to decide the best route to build the line across this immense and unforgiving land and many alternative routes were proposed.

At first, progress was exceedingly slow and within a year the railway’s chief engineer and general superintendent were fired after building only 211 km of track. After American William Cornelius Van Horne was hired as the new general manager, he decided that contractors should be hired for different sections of the line across the nation. Still it would take more than 10 years before track was laid on the prairies west of Winnipeg.

Andrew Onderdonk, the contractor building in British Columbia progressed eastward through the most difficult sections of line, up the hazardous Fraser Canyon, and then through Kamloops towards Eagle Pass. Onderdonk had brought in thousands of Chinese labourers under a contract labour system, paying their passage from China to the work camps on the Fraser.

The Chinese labourers were able to lay more than six miles of track in a single day, but at a terrible price. They were frequently assigned the most dangerous jobs, usually involving explosives, at a lower rate of pay in demanding and hazardous conditions. It was common for Chinese workers to die in rock slides, collapsing tunnels, when they fell off bridges under construction or from disease. Two men died for every mile of track that was laid.

By November 7, 1885, at Craigellachie, British Columbia the last spike connecting the eastern and western sections of the tracks was driven by Donald A. Smith, C.P.R. company director. Within a year, on June 28, 1886, the first transcontinental train left from Montreal and Toronto to Port Moody. While the railway was completed four years after the original 1881 deadline, it was completed more than five years ahead of the new date of 1891 that John A. Macdonald gave in 1881.

After the completion of the railway, the C.P.R. promoted the settlement of the Prairie provinces through the sale of farm land. The Chung Collection contains numerous brochures, posters, and other material related to the C.P.R. land settlement department.

The Chung Collection has a slice of the Last Spike railroad track and hundreds of photographs of C.P.R. railroad locomotives and railroad stations. There are also numerous photographs taken by railroad employees and passengers as well as other material such as timetables, schedules, commercial pamphlets and other ephemera, and textual records related to those who worked and travelled on the C.P.R. across Canada. 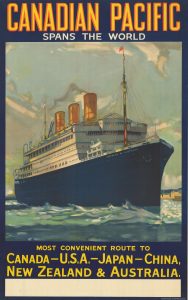 In 1887, a Canadian Pacific Railway Tran-Pacific service from Vancouver to Asia was begun under the direction of Sir William Cornelius Van Horne. The purchase of the S.S. Abyssinia, S.S. Parthia, and the S.S. Batavia from Cunard was the initial step in a plan to create a fleet of luxury ocean liners built to C.P.R. specifications. With the success of this new venture, the C.P.R. adopted a new name for the division calling it the Canadian Pacific Steamship Company (CPSC).

By 1891, the first of the Empress class of ocean liners were delivering mail, silk, tea, and passengers from Asia. Soon Canadian Pacific liners would cross both the Atlantic and Pacific, dominating first-class trans-Pacific travel with three of the most opulent ocean liners in the world: the Empress of India, the Empress of China, and the Empress of Japan. These three ships would have the prefix R.M.S. before their names to signify that they were Royal Mail Ships that operated subsidized mail service between Britain and Hong Kong via Canada.

The Chung Collection has thousands of photographs and related material on C.P.R. steamships with a particular emphasis on the Empress class ships. Some of the related material includes pamphlets, menus, world cruise photograph albums, clippings, diaries, and correspondence from both passengers and employees of these vessels. The collection also contains photographs and souvenirs gathered by two former C.P.R. steamship employees, John De Laval and Lawrence Crawford.

Travel and Tourism with the C.P.R. 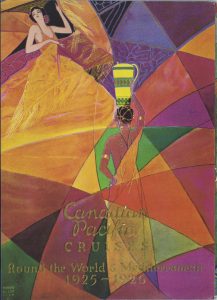 After the C.P.R. laid a railway network across Canada, equipped it with more than 2,250 locomotives, and tens of thousands of freight and passengers cars they moved into ocean travel and shipping, accumulating a fleet of 100 ships and some of the world’s finest ocean liners to become a major international cargo carrier as well as a globally recognized provider of luxurious around the world tours.

The C.P.R. recognized that after it had built the transcontinental railroad for Canada it had the opportunity to do more than transport cargo. The “All Red Route” as it was known by sea from Europe then across Canada to the Pacific and Asia brought the British Empire within the comfortable reach for any traveler. The C.P.R. ingeniously began to advertise the vast tracks of scenic mountain ranges and vistas that it owned as places to visit and it built company owned luxury hotels at these destinations for travelers to stay.

Cruises were all the rage in the 1920s and 30s among the wealthy seeking to escape the dreary winters of Europe and North America. The most affluent were able to spend six months on a world cruise calling at eighty-one ports in twenty-three countries aboard ocean liners like the luxurious Empress of Britain. Shorter cruises took wealthy patrons to the West Indies from New York or to the Mediterranean from London. The accommodations and service aboard cruise ships of the C.P.R surpassed even their grand hotels. First class passengers were served the finest food in elegant dining rooms and danced to orchestras in the ship’s ballroom.

In the 1950s with the growing post-war popularity of air travel the Canadian Pacific Air Lines began to take passengers to Australia and many destinations in the Asia, South America, and Europe. By the early 1970s the shift from ocean to air travel was complete when the C.P.R. sold the last of their great ocean liners to another tour company.

However, thanks to the C.P.R.’s focus on advertising the “The World’s Greatest Travel System” the Chung Collection has many of the photographs, clippings, posters, and related ephemera that were used to promote the railroad journey to the scenic mountain ranges near Banff, Alberta and British Columbia. Because the C.P.R. pampered their guests on their exotic tours, giving them personalized photograph albums as a memento of every port-of-call on their voyage, the Chung Collection has several of these in near perfect condition. Many of the passengers and employees kept correspondences, mementos, and related ephemera in scrapbooks that are also available in the collection along with the hundreds of photographs taken by them. 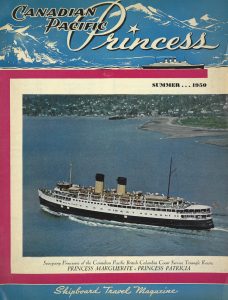 The C.P.R. seeing the rich potential of coastal sea traffic, purchased the Canadian Pacific Navigation Company, which had run the first steamers on the coast under the Hudson’s Bay Company flag since the arrival of the Beaver in 1836.

After the turn of the century, the economy and population of British Columbia expanded dramatically. The C.P.R. built up its Princess line – the pride of the coastal service – to a fleet of thirty-two ships. These steamers plied the “Triangle Route” between Vancouver, Victoria, and Seattle. Some ships sailed further north, where they were the lifeline of many isolated ports on Vancouver Island and up the coast of British Columbia to the Alaska Panhandle. The British Columbia Coast Steamship Service was renowned for its Princess cruises through the dramatic Inside Passage to Alaska. The coastal service brought prosperity to the region and was recognized as one of the finest coastal fleets in the world.

The Chung Collection contains archival records of the B.C.C.S.S., including log books of ferries, photographs, and office documents. This records provide a rich insight into the operations of the B.C.C.S.S., from the time of C.P.R.’s purchase of the Canadian Pacific Navigation Company to the dissolution of passenger services in the 1970s.

Artwork and Images of the C.P.R. 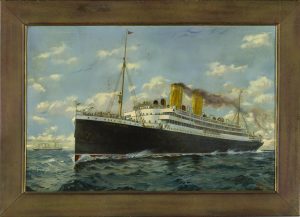 The Canadian Pacific Railway made extensive use of the large-format colour poster in its advertising efforts. First to draw passengers to the railway and C.P.R. hotels, then later to promote its world cruises, tours of Canada, and luxurious trains and airplanes, the C.P.R. used bold design and slogans in its promotional material. Artists were recruited from among Canada’s most celebrated painters and graphic designers and included artists such as A. Y. Jackson, Norman Fraser, Alfred Crocker Leighton, Roger Couillard, Kenneth Shoesmith, and Peter Ewart.

Earlier posters promoting the C.P.R. and Canadian settlement primarily used lettering, with large slogans and lots of information onto one poster. Many later posters bore iconic images of trains and ships, sometimes even lacking text or only bearing the words “Canadian Pacific.” These posters show the prevailing graphic styles over nine decades of advertising.

The Chung Collection includes more than 200 lithoprint and silkscreen posters, as well as other C.P.R. artwork and supplemental material, including books such as Posters of the Canadian Pacific by Marc Choko and David Jones. 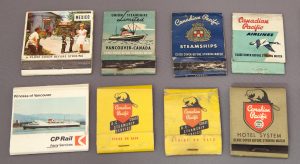 First class travelers on C.P.R. steamships and railways ate off of distinctive lines of china and silverware, and had the opportunity to purchase C.P.R. souvenirs, such as dishware, picture frames, and diaries to fill in the memories of their journeys. The Chung Collection contains several hundred artifacts of the C.P.R., including glass and ceramic ware, silverware, souvenirs, employee hats and badges, and more.

Many of these artifacts were salvaged from the bottom of the ocean. Dr. Chung purchased them from a scuba diver who gathered dishes which were discarded by C.P.R. steamship kitchen staff too tired to finish washing up at the end of the night. Others were purchased at antique and flea markets. The collection includes a newel post from the Empress of Japan, one of many artifacts salvaged by locals after the ship was scrapped in Burrard Inlet.

Working for the C.P.R. 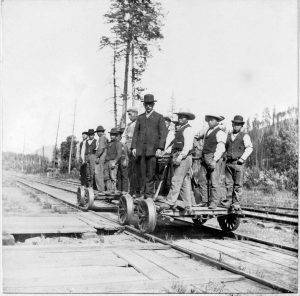 Many thousands of people have been employed by the Canadian Pacific Railway Company since its inception in 1881. During the construction of the railway, many of these people were Chinese immigrants, working for considerably less than their Canadian and European counterparts.

Since the completion of the railway, the C.P.R. employed workers as passenger agents, train operators, steamship captains, cooks, engineers, stewards, and many other occupations.

The Chung Collection contains textual records and ephemera relating to employment with the Canadian Pacific Railway Company, including operating rules for employees, pension regulations, examination booklets, certificates of discharge related to service on C.P.R. steamships, correspondence and scrapbooks, as well as photographs of C.P.R. employees.