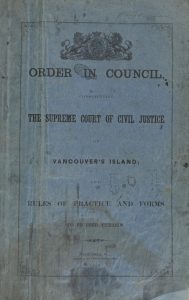 Order in council constituting the Supreme Court of Civil Justice of Vancouver Island…. KEB535.4 .A37 1858

The Chung Collection traces the history of the province of British Columbia from the first voyages by Europeans to the North Pacific, made by Spanish explorers as early as 1542. More than 200 years later, interest in land possession and fur trade accelerated exploration and many voyages were made by Russian, Spanish, French, and British explorers. The British eventually gained possession of the coast, and Fort Victoria was established on Vancouver Island. Travel narratives of explorers such as James Cook, George Vancouver, Dionisio Galiano, Ivan Kruzenshtern, and Etienne Marchand show the international nature of our province’s history.

Historical documents, photographs, books, maps, and pamphlets illustrate British Columbia’s political, social, and cultural history. The scope of these documents include everything from 18th-century documents and books to tourism brochures from the 1950s and 60s. The collection includes archival records related to the explosion of the S.S. Greenhill Park in the Port of Vancouver in 1945. Another highlight of the collection includes an Order in Council constituting the  of Vancouver Island (1858), thought to be the first book published in B.C.